A chemical element, symbol Bh, atomic number 107. Bohrium was synthesized and identified in 1981 by using the Universal Linear Accelerator (UNILAC) of the Gesellschaft fur Schwerionenforschung (GSI) at Darmstadt, West Germany, by a team led by P. Armbruster and G. Muzenberq. The reaction used to produce the element was proposed and applied in 1976 by Y. T. Oganessian and colleagues at Dubna Laboratories in Russia. A ²⁰⁹Bi target was bombarded by a beam of ⁵⁴Cr projectiles. 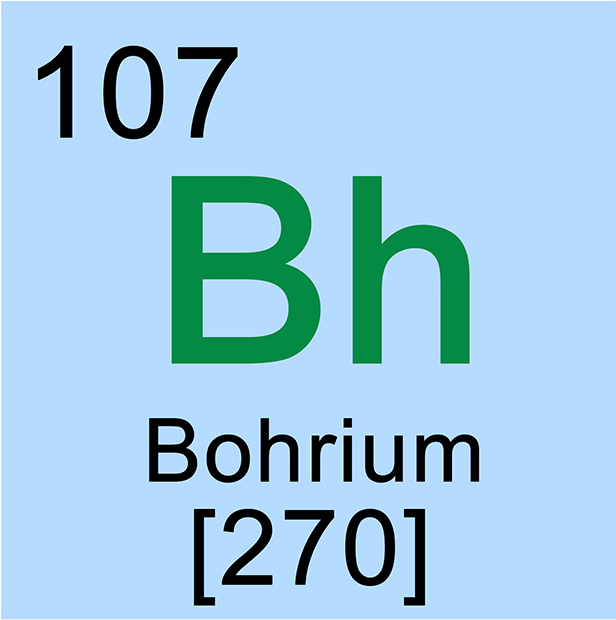 The best technique to identify a new isotope is its genetic correlation to known iso­topes through a radioactive decay chain. These decay chains are generally interrupted by spontaneous fission. In order to apply decay chain analysis, those isotopes that are most stable against spontaneous fission should be produced, that is, isotopes with odd numbers of protons and neutrons. Not only does the fission barrier govern the sponta­neous fission of a species produced, but also, in the deexcitation of the virgin nucleus, fission competing with neutron emission determines the final production probability. To keep the fission losses small, a nucleus should be produced with the minimum ex­citation energy possible. In this regard, reactions using relatively symmetric collision partners and strongly bound closed-shell nuclei, such as ²⁰⁹Bi and ²⁰⁸Pb as targets and ⁴⁸Ca and ⁵⁰Ti as projectiles, are advantageous.
Six decay chains were found in the Darmstadt experiment. All the decays can be attributed to ²⁶²Bh, an odd nucleus produced in a one-neutron reaction. The isotope ²⁶²Bh undergoes alpha-particle decay (10.38 MeV) with a half-life of about 5 ms.
Experiments at Dubna, performed in 1983 using the 157-in. (400-cm) cyclotron, established the production of ²⁶²Bh in the reaction ²⁰⁹Bi ⁵⁴Cr.