Hydrogen bond: It is a bond formed between a hydrogen atom attached to a highly electrovalent atom (F,O,N) and another highly 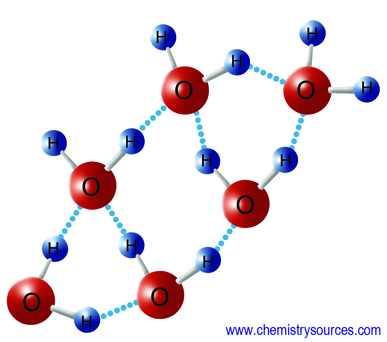 electronegative atom of the same or different molecule and having a lone pair of electrons.

(i) The electronegative atom attached to the hydrogen should be small.

(ii) The electronegativity of the atoms to which hydrogen .atom is attached should be high.

The positively charged hydrogen atom attracts and is attrac­ted by ·the negative end of the, other molecule. Thus two or more molecules may associate together to form clusters of molecules.

(i) Hydrogen bond is electrostatic in nature and thus com­pound are strongly polar.

(ii) Hydrogen bond” is only 5to 10% (5 K cals/mole} as strong as that an ordinary covalent bond but is often stronger than other inter molecular forces of the dipole and Van der Waall’s forces.

(iii) The strength of hydrogen bond tends to increase as the electronegativity of the element increases.